“I set My rainbow in the cloud, and it shall be for the sign of the covenant between Me and the earth. It shall be, when I bring a cloud over the earth, that the rainbow shall be seen in the cloud: and I will remember My covenant which is between Me and you and every living creature of all flesh: the waters shall never again become a flood to destroy all flesh. The rainbow shall be in the cloud, and I will look on it to remember the everlasting covenant between God and every living creature of all flesh that is on the earth.” —Genesis 9:13–16

The faint rainbow that appears after a summer thunderstorm symbolizes God’s mercy, His compassion on all. Moreover, it is a sign of God’s covenant, His binding agreement with all humanity to never destroy the earth with a flood.

God initiated this covenant under the worst circumstances: “The earth was filled with violence” (6:11, 13). Even though humanity’s decline into evil greatly troubled God, He favored one man, Noah. He determined to save Noah and his family from His coming judgment and establish His covenant with them.

Although Noah was surrounded by violence and all kinds of evil, Noah walked with God (6:9) by seeking to obey Him. Noah’s simple obedience is recorded five times in this story (6:22; 7:5, 9, 16; 8:17–18). God called this obedient man to build an ark. With this large boat, God saved Noah from the cleansing waters of the Flood. With the past evils and sins washed away from the earth, Noah and his family could start anew (see 1 Pet. 3:21 for Peter’s analogy comparing baptism with the Flood).

God not only gave them a fresh start; He also gave them an unconditional promise or covenant. He promised not to destroy the earth with a flood no matter how evil Noah’s descendants got. Indeed, He promised that until the end of the earth, there would be the seasons of planting and harvest and day and night. God unilaterally promised to uphold the rhythms of the earth in order to sustain human life—even though humans had rebelled against Him, their Creator.

Today all of us—Noah’s children—should remember God’s mercy to us when we see the beauty of the rainbow.

What are God’s promises telling you today?

Excerpted from the NKJV Study Bible. 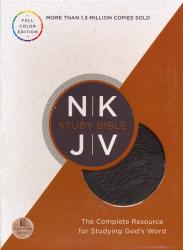