The heavens declare the glory of God;
the skies proclaim the work of his hands.

What is the glory of God? The answer is as infinite as God’s glory itself, so the question can never be answered exhaustively. Some key aspects of God’s glory, however, can be summarized as follows: the glory of God is the weight of the majestic goodness of who God is an the resulting name, or reputation, that he gains from revealing himself as Creator, Sustainer, Judge, and Redeemer, perfect in justice and mercy, loving-kindness and truth (cf. Exod 34:6-8). God’s glory elicits praise.

God created the world as a place where he would be known, served, praise, and worshiped – a place where his glory would be both manifest and enjoyed. In this respect, God created the world as a cosmic temple. What God set out to accomplish at the beginning is what he will bring to pass at the end of all things (cf. Rev 21:15-22:5). The cosmos is a stunning and fabulous temple, brimming with God’s wisdom and creativity. In a sacred garden spot in his cosmic temple, God placed an image of himself. This image was made not of wood or stone or gold or silver but of flesh and blood. Human beings, like the cosmic temple of the universe, radiate God’s glory. The human body is an engineering masterpiece; childbirth is a miraculous mystery; and the mercy and justice that humans can display as they relate to one another is simultaneously light and heavy, acute and broad, high and deep, reflecting the very glory of the One whose image they bear. The image of the real God is not like the idolatrous manmade images that neither see nor hear nor eat nor smell but is a living being capable of rational thought, relational engagement, and creative development. God endowed his image-bearers with the capacity to use all their powers in the mysterious and elevating worship of the One who made them, sustains them, and created them for himself.

God created the world as a theater of his glory, and in the theater he put an image of himself made to enjoy his glory. Moreover, this image of God was to exercise dominion over the world and bring it into subjection (Gen 1:26-28). Rather than covering the dry lands with the glory of the Lord as the waters cover the sea, however, the image-bearer was tempted, sinned, and consequently cast out of the garden of God’s presence (Gen 3:6-7, 23). Even this, however did not take God by surprise. The omniscient Creator knew all that would come to pass in the world he created, and he went forward with the project. We can observe that the sin Adam chose to commit opened up previously impossible prospects. With Adam guilty, God now has an opportunity to display the wonder of his mercy, to demonstrate his power to overcome volitional evil, and to show his love by accomplishing salvation. God set mercy and salvation in motion even as he spoke judgement on the sinners, thereby displaying the unique glory of his ability to save and show kindness, love, and mercy even as he keeps his word and upholds righteousness by doing justice (Gen 3:14-19, especially 3:15).

To consummate his purposes (Eph 1:9-10), God sent Jesus the servant who would be exalted and glorified (Isa 52:13; cf. John 12:23). The humility and obedience of Jesus displays God’s glory in what looks to the world like weakness, and this is in keeping with the way God uses the weak things of the world to shame the strong (1 Cor 1:18-31), showing his glory by reversing expectations. God promised to make a great nation of a man with a barren wife (Gen 11:30; 12:1-3). God chose “the fewest of all peoples” to be his own (Deut 7:7). When God decisively answered Satan’s pride and rebellion, he sent his Son as a helpless baby born to a peasant girl in questionable circumstances. Praise ordained from the mouths of children and infants indeed (Ps 8:2). God silenced the dragon’s roar with the infant’s cry (Rev 12:1-12.). Not only did God show his foolishness and weakness to be wiser and stronger than that of men, he achieved victory by what looked like defeat. Christ died on the cross. In the paradox of the ages, the humiliation of Christ won him the name above every name (Phil 2:5-11). At the cross Jesus was glorified and glorified the Father (John 12:23,28; 13:31-32). God’s wrath was poured out, and the full weight of God’s justice was visited on Jesus the Messiah as he died on the cross. Simultaneously, God showed his great love for his people in his willingness to sacrifice his beloved Son, accomplishing the extravagant plan of redemption. At the cross, then, God was glorified for his justice and his mercy (cf. Exod 34:6-7), while Jesus was glorified by his unique ability to satisfy God’s wrath and accomplish the redemption of God’s people. And Paul asserts that God did this to display his righteous and merciful glory as the just justifier of believers (Rom 3:25-26).

God is now saving his people to the praise of his glory and grace (Eph 1:6,12,14). He is displaying his manifold wisdom through the church to the spiritual authorities in heavenly places (Eph 3:10). Paul ascribes glory to God in the church and in Christ forever (Eph 3:20-21). The redemption of God’s people will culminate in the appearance of Christ in glory, dealing out retribution to his enemies and saving those who hope in him (2 Thess 1:5-12).

Does God Seek His Own Glory? 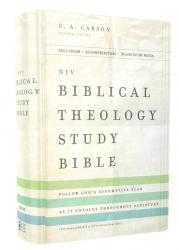 Ponder the individual stories and themes of Scripture while observing how they all fit together in God’s grand biblical narrative with helpful introductions to books and sections of the Bible combined with 20,000 verse-by-verse study notes to guide you to a clearer understanding of Scripture.

I like it that God created us to use our brains in cooperation with His Holy Spirit to discern between WHAT we are joyful/thankful/happy about; WHY we feel that way, and if our happy thoughts/feelings are of God or self/satan. God created us to surrender our minds, thoughts, feelings, motives to the molding and guidance of His Word, to be lead and counseled by His Holy Spirit. When we give our mind and feelings to God completely, our feelings will be intelligent and not blind euphoric emotions.
We shouldn’t do what ‘feels’ good, but satan can easily deceive us into believing that if it ‘feels’ good then it must be good/right/of God. WRONG. Not to say that good feelings are wrong, but just that we ought to be on high alert of WHAT we feel and if those feelings are according to what God deems true and good, or are those feelings a deception from satan to deceive us into doing evil. And if what we feel is in accordance to any evil, we need to pray to God asking Him to give us instant realization of what we feel and think, if those feelings and thoughts are from God or satan. Lord God in heaven, please give us godly hatred for all that is sinful, because sin ruins us in many ways that we dont readily see or understand. In Jesus’ name. Amen