Then God said, “Let us make mankind in our image, in our likeness, so that they may rule over the fish in the sea and the birds in the sky, over the livestock and all the wild animals, and over all the creatures that move along the ground.” Genesis 1:26 NIV

Throughout the ancient Near East, an image was believed to contain the essence of that which it represented. That essence equipped the image to carry out its function. In Egyptian literature, there is one occurrence of people in general having been created in the image of a deity, but it is generally the king who is spoken of in such terms. The image is the source of his power and prerogative.

In Mesopotamia there are three categories of significance.

In an image, it was not physical likeness that was important, but a more abstract, idealized representation of identity relating to the office/role and the value connected to the image. When Assyrian king Esarhaddon is referred to as “the perfect likeness of the god,” it is his qualities and his attributes that are under discussions. The image of the god did the God’s work on earth.

The Biblical view is similar as people were created in the image of God, embodying his qualities and doing his work. They are symbols of his presence and act on his behalf as his representatives. The two words used in the text differ in nuance, “Image” refers to the something that contains the “essence” or something else, while “likeness” is more connected to “substance,” expressing a resemblance at some level.

What characteristics of God come to mind when you think of being created in his likeness? 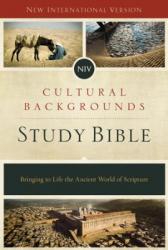 You’ve heard many Bible stories hundreds of times, but how many behind–the–scenes details are you missing? Sometimes a little context is all you need to discover the rich meaning behind the stories of Scripture. Discover new dimensions of insight through:
– Book introductions explain the context in which each book of the Bible was written
– Verse–by–verse study notes reveal new insights to even the most familiar passages
– Key Old Testament (Hebrew) and New Testament terms are explained and expanded upon
– Over 300 in–depth articles on key contextual topics
– 375 full–color photos, illustrations, and images from around the world
– Dozens of charts, maps, and diagrams in vivid color
– Full text of the NIV