Ada Blackjack, 1898 – 1983
Ada Blackjack was born in Alaska in 1898, the same year as the Alaskan Gold Rush. At age sixteen, Ada married Jack Blackjack, a hunter and dogsled driver. He was a cruel husband and Ada’s was a brutal life. After losing two children in infancy and suffering further heartbreak when it was discovered the surviving son, Bennett, had tuberculosis, Jack abandoned his family.

Ada desperately needed money to pay for Bennett’s treatment, so she joined four men on an Arctic expedition as the seamstress and cook for a staggering sum of fifty dollars per month. The expedition, tasked with claiming Wrangel Island for Britain and bringing back a cache of furs, departed to the far north of the Arctic Sea in September of 1921.

The group landed, set up camp, and began preparations to survive the frigid winter. Ada was desperately afraid of the many polar bears and the lengthening darkness in the Arctic. Her fears began to overpower her as she developed a condition known today as Arctic Hysteria. The men did not understand her ailment; in an effort to keep her working, their treatment alternated between gentleness and harshness. As the winter wore on, Ada began to learn how to contain her desperation and returned to her work.

All of the explorers were anxious to leave for home as soon as the supply boat arrived the following summer; to their horror, ice enclosed the island and the boat never appeared.

Inadequately prepared for their second winter in the Arctic, three of the men decided to hike across the ice to Siberia and bring back food. Ada was left behind to care for Lorne Knight who suffered from severe scurvy. The supply party left in mid–January and were never seen again. Though Knight often harshly reprimanded her and blamed her for his worsening condition, Ada feared his death; without him, she would be left entirely alone.

Fearful, lonely, and desperate for food, Ada taught herself to hunt. She figured out how to set the traps and became proficient with a gun.

Early on in the expedition, Knight had loaned Ada a Bible; she began to spend most of her time reading it. She came to realize she could do nothing but trust in God and live according to His Word. She began to care for Knight with the same care she longed to give her sickly little son. She hunted, cooked, ignored his complaints, and did her best to keep him alive. She returned good for evil. Despite her best efforts, Knight died on June 23, 1923.

Ada kept a daily diary. In it, she thanked God for her survival, asked Him to forgive her sins, and thanked Jesus for His goodness to her. Uncertain whether or not a rescue boat would arrive, she began to prepare herself for another winter on the island. Every day, she wrote down what she had accomplished and thanked the Lord Jesus for another day. On August 20, 1923, a boat finally arrived from Nome.

After Ada was returned to civilization as the lone survivor of the ill–fated Arctic expedition, she became the center of media frenzy. When she was heralded as a heroine, she simply stated, “Brave? I don’t know about that. But I would never give up hope while I was still alive.”

Throughout our nation’s history, women like Ada have held to hope when all seemed lost. Their trust in the Lord has infused the very fiber of our nation with a forward–looking gaze—a hope that leads us onward as “one nation under God.”

Excerpted from the American Woman’s Bible.

Can you think of a time when you felt God’s goodness during outwardly difficult circumstances? Post a comment below! 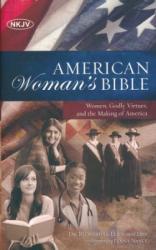 Be inspired by the lives of prominent American women past and present whose lives of faith and biblical virtue helped shape the fabric of the American way of life. Features: Biographies of influential American women, inspirational quotes, essays about biblical virtues embodied in women during key chapters of America’s story, and the complete NKJV text. Learn More