Love your enemies and pray for those who persecute you. —Matthew 5:44, NIV

Ronnie Smith, a Texan, had been out for a morning jog when gunmen in a black jeep targeted and killed him. The news reported that Ronnie had graduated from the University of Texas with a master’s degree and was teaching chemistry in Benghazi. At this, my ears pricked up. Benghazi was a highly unstable, war-torn city where militias held more power than the government. Why would anyone go there to teach? I had a hunch, but I wanted to investigate and find out more.

One of his students, Yomna Zentani, told reporters how Ronnie impacted her and other students. “After everything that happened in Libya, we were losing hope and he was the only one who was supporting us, motivating us, telling us that as long as we studied everything would be okay. He was the silver lining. He dedicated so much of his time for all his students. He chose to come here and help us, and to risk his life.”

What Could Have Motivated Ronnie?

Even as I write this, tears are overwhelming me. I think of great men like Ronnie Smith and have to ask myself, How did Ronnie become like this?

The reason why Christians can follow Jesus boldly into death is because we are not worried about trying to save ourselves. The gospel is that God has already promised us salvation through his infinite mercy and grace. Christians can follow Jesus and die for their enemies because the gospel promises and enacts salvation, taking away all fear of death. This frees us to love everyone, friend and foe, enabling us to live according to the image in which we were made, the image of a God who is love in his very essence.

The gospel calls us to live and love without holding back

Ronnie’s Wife Responds to His Murderers

One week after his murder, Ronnie’s wife Anita wrote an open letter to the men who killed him. Its message was so transcendent, so otherworldly, that it stunned the world. She did not mince words.

To his attackers: I love you and I forgive you.

How could I not? For Jesus taught us to “Love our enemies”—not to kill them or seek revenge. Jesus sacrificed his life out of love for the very people who killed him, as well as for us today. His death and resurrection opened the door for us to walk on the straight path to God in peace and forgiveness. Because of what Jesus did, Ronnie is with Jesus in paradise now. Jesus came not only to take us to paradise when we die but also to bring peace and healing on this earth. Ronnie loved you because God loves you. Ronnie loved you because God loved him—not because Ronnie was so great, but because God is so great.

Ronnie’s death was the voice of a martyr testifying to the love of Christ, and Anita’s letter was his megaphone. This love can change the world.

Drawn from Nabeel Qureshi’s book No God but One: Allah or Jesus? 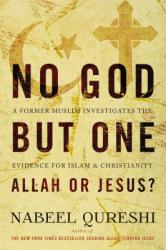 No God But One

In No God But One Nabeel reveals what he discovered in the decade following his conversion, providing a thorough and careful comparison of the evidence for Islam and Christianity–evidence that wrenched his heart and transformed his life.