For God so loved the world that he gave his one and only Son, that whoever believes in him shall not perish but have eternal life.”
—John 3:16

In the summer of 2013, Man of Steel put Superman back on fans’ radars in a big way. Even when a new director took a completely different direction with the Superman franchise, the film was still filled with Christ comparisons.

There are minor things to take notice of, such as a young Clark Kent reading the philosophies of Plato, just as a young Jesus certainly read and studied the Torah. Clark is also thirty–three years old at the climax of the film, the age many scholars believe Jesus to have been at the time of his death.

An adolescent Clark Kent also watches his earthly father, Jonathan Kent, die in a tornado, something he could have prevented had his father felt the world was ready to see what his son could do. Compare this with Jesus at the wedding in Cana when a miracle is asked of him, yet he responded, “My time has not arrived” (John 2:4).

While he was alive, though, Jonathan Kent struggled with his fear that the world wouldn’t understand his son. “When the world finds out what you can do, it’s gonna change everything,” Jonathan shares with his young son. “Our beliefs, our notions of what it means to be human. Everything…People are afraid of what they don’t understand.”*

Surely Joseph had similar struggles concerning Jesus, the boy he raised as his own son. When Mary became pregnant with a child who was not his, Joseph had in mind to divorce her quietly until an angel told him who the baby was. We can only speculate Joseph’s reactions, but protecting Jesus became uppermost in his mind, as indicated by their mad dash to Egypt in order to flee the wrath of Herod. For no longer was his priority to protect young Mary from public disgrace; rather, he found himself suddenly responsible for helping to protect and raise a child who would save the people from their sins. This child was the hope that a world crying out to God had been waiting for.

It is in this theme of hope that we find the heart of Man of Steel. Upon meeting his biological father for the first time, Clark (whose Kryptonian name, he learns, is Kal–El) is told, “The symbol of the house of El means hope.”* And this is the symbol placed on his chest that resembles an S. His father, Jor–El, sent his only son to Earth to bring the people hope.

The hope that God sent to earth was his Son, Jesus. From Adam and Eve in the garden, to the Israelites wandering in the desert, to the people of Israel who had been conquered by foreign kingdoms, the Old Testament is filled with people calling out for help. They desperately needed God’s intervention. They knew they were broken, sinful, and without hope on their own. In response, God “gave His only Son so that whoever believes in Him will not face everlasting destruction, but will have everlasting life” (John 3:16).

Though the world’s need for everlasting hope was fulfilled two thousand years ago when Jesus came to earth, it has by no means been realized by all. We oftentimes find ourselves fighting our need for hope. It does not make sense that we need someone not of this world to save us. Nor do we understand why a father would love a people so much he would send his only son to die for them. And the confusion makes us afraid. Afraid of our vulnerability, of our fragility, of our dependency.

The people of Metropolis certainly did not immediately realize their need for Superman when General Zod tried to create a new planet of Krypton out of the foundation of earth, which would have resulted in billions of deaths; but that didn’t change the fact that they did, indeed, desperately need him. And countless millions today also trudge through their days crying out for hope, not knowing that it has already come.

What movies have you seen that seem to reflect a biblical story?

Excerpted from the All You Want to Know About the Bible in Pop Culture. 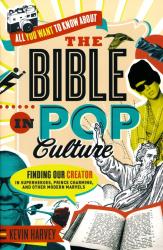 All You Want to Know About the Bible in Pop Culture

When you look closely, past the outrageous outfits and the antics of teen pop–sensations, God and His stories are still prevalent in pop culture today. Find redeeming values and gospel messages in today’s movies, music, popular TV shows, and much more! Learn More