The Angels Announce Jesus to the Shepherds
8Now there were in the same country shepherds living out in the fields, keeping watch over their flock by night. 9And behold, an angel of the Lord stood before them, and the glory of the Lord shone around them, and they were greatly afraid. 10Then the angel said to them, “Do not be afraid, for behold, I bring you good tidings of great joy which will be to all people. 11For there is born to you this day in the city of David a Savior, who is Christ the Lord. 12And this will be the sign to you: You will find a Babe wrapped in swaddling cloths, lying in a manger.
—Luke 2:8-12

Verse 2:8
Shepherds. Bethlehem was nearby Jerusalem, and many of the sheep used in the temple sacrifices came from there. The surrounding hills were prime grazing land, and shepherds worked in the area day and night, all year round. Therefore it is not possible to draw any conclusion about the time of year by the fact that shepherds were living out in the fields.

A Savior. This is one of only two places in the gospels where Christ is referred to as “Savior”—the other being John 4:42, where the men of Sychar confessed Him as “Savior of the world.”

Christ. “Christ” is the Greek equivalent of “Messiah.”

Lord. The Greek word can mean “master” – but it is also the word used to translate the covenant name of God. Here (and in most of its New Testament occurrences), it is used in the latter sense, as a title of deity.

Share something new you learned about the Messiah’s birth.

Notes taken from the verse–by–verse notes in The MacArthur Study Bible. 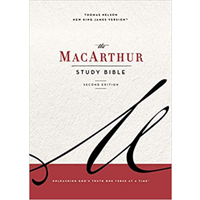 Over 2 million readers around the world have had their spiritual lives enriched and their understanding of God’s Word expanded by The MacArthur Study Bible. Drawing on more than fifty years of dedicated pastoral and scholarly work, Dr. John MacArthur’s verse-by-verse study notes, book introductions, and articles display an unparalleled commitment to interpretive precision–with the goal of making God known through His Word.