Compassion literally means “suffer with.” God calls us to come alongside of people who are suffering and suffer with them so they are not alone. It doesn’t mean we can fix the problem, but it does mean we can enter into their pain. Before we act on or practice this belief, we must believe it is God’s call on the life of all Christ followers. When we believe this in our heart, we will show compassion to all people, especially to those in need. This is not a “do as I say, not as I do” command from the Lord. God himself is merciful and full of compassion.

God: Full of Justice and Compassion
Throughout their history, the Israelites struggled to stay true to God. Sometimes they followed God, but those periods of faithfulness were followed by times of sin and rebellion. But God’s love for his people was always evident. His compassion was constant as he offered the people relief from the misery caused by their own sin.

Jesus: Model of Compassion
Throughout his teaching ministry, Jesus masterfully instructed his followers to show compassion to people in need as the ultimate fulfillment of the Law of Moses. Toward the very end of his life on earth, Jesus provided his disciples with divine insight into the ministry of compassion to the poor and needy. He tells them their acts of compassion now have eternal consequences. When Jesus returns he will separate the obedient followers from the unbelievers. How we treat others should make it clear into which of the two groups we fall. After all, our behavior has results that reach far beyond our time on this earth.

Believers: The Ongoing Call to Compassion
The same challenge given to the people of Israel to live a life of compassion was also issued to the newly formed Christian church after Jesus’ death and resurrection. James, who became the leader of the church in Jerusalem and was likely the half brother of Jesus, wrote what may have been the first book of the New Testament. In his letter, James instructs new believers on the practical how–tos of living this new life in Christ. These same charges apply to believers today.

Why do you believe that it’s so hard to share in other’s sufferings?

Excerpted from Believe: Living the Story of the Bible to Become Like Jesus. 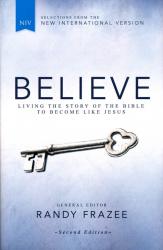 Understand and believe with your whole heart the powerful truths taught in the Scriptures. Believe details the ten core beliefs of the Christian faith, ten key practices of a Jesus follower, and ten key virtues that characterize someone who is becoming more like Jesus. Learn More