The sun will be turned to darkness
and the moon to blood
before the coming of the great and dreadful day of the LORD.
And everyone who calls
on the name of the LORD will be saved;
—Joel 2:31-32

There are signs of a growing awareness regarding social justice in our world today, but much of the celebrity attention to the issue approaches it in purely humanistic terms without any point of reference in God or faith. To those attracted intuitively to the notion of justice but hopelessly disconnected from the ultimate source and standard of all true justice, Joel’s message comes as a jarring reality check: only God, the Sovereign Creator and Lord of the universe, is completely holy and just. There can be no real justice in the midst of humanity if you exclude the Ruler and Judge of all the earth. The only justice that is consistent, enduring and truly devoid of human prejudice is God’s justice.

A pivotal concept in Joel’s message found in the book of Joel is the phrase “the day of the LORD,” which occurs five times in the book (1:15; 2:1,11,31; 3:14). Rooted in the common belief that a powerful military ruler could win a major battle in a single day, this key notion in the prophetic tradition denotes God’s swift and decisive victory over his enemies, bringing deliverance to his people. Three applications of the concept in Joel point to God’s justice on display in three expanding circles.

In the first instance, God’s justice necessitates impending judgment on the disobedient nation of Israel. God’s instruments of justice are a horde of terrifying locusts and a formidable army of foreign invaders.

Second, God’s justice compels him to call to account the invading foreign nations—the very people he used to bring justice to Israel—and to punish them for their wrongdoing against Israel. God’s justice applies to everyone (see Joel chapter 3).

A third wider circle of God’s justice, while not as explicit, is clearly alluded to in Joel: a prediction of a future messianic age in which a universal outpouring of God’s Spirit will herald a final day of universal judgment and the return of Christ, and then usher in an ideal era of justice and righteousness (2:28–32). So, from start to finish, it is God’s justice that is on display in Joel.

Excerpted from the Book Introduction to Joel in the God’s Justice Bible.

God hates Israel’s worship because of the people’s injustice. The powerful wanted to separate their relationship with God from their relationships with their neighbors. How do you see this dynamic happening among God’s people today? Post a comment below! 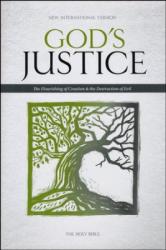 God’s justice—his “setting things right”—is a foundational principle found throughout the Bible. NIV God’s Justice: The Holy Bible is designed to fire your passion for social justice and take positive steps to bring justice issues to light in your own circle of influence. Features:
• Articles and notes by 57 international scholars and also writers from organizations such as the International Justice Mission, Compassion, and World Vision
• Book introductions draw out the theme of God’s justice in each book of the Bible
• Study notes on passages speak to the problems of injustice in the world
• Prayers and questions for reflection at the end of each book
• Complete text of the NIV Bible
Learn More