The word “restoration” is one of my favorites. I love the idea of taking something old and broken and making it like new.

One of the clerks at the Home Depot where I do most of my home improvement shopping owns a ’56 Ford pickup. When I see it in the employee parking area, I can’t help but stare. It’s one of the most beautifully restored vehicles I’ve ever seen, complete with its mid–fifties turquoise finish. Even though it’s a truck, my suspicion is that the owner would rather die than put anything in the bed that might scratch it.

The passage today talks about a different kind of restoration—a relationship fixer–upper. What Joseph’s brothers had done to him was horrible. Their hostility toward him as a teenager had led them to sell him—they had actually wanted to kill him but changed their minds when the opportunity to exchange him for cash money presented itself!

However, to earn this relationship with his brothers, Joseph had been an arrogant little spoiled brat, shamelessly strutting his stuff in their faces.

Now it’s almost 30 years later. All of these men have faced untold hardships. Things haven’t turned out according to plan for any of them. Maturity has taken root. And now Joseph stands in front of his brothers like my Home Depot friend must have stood in front of his rusted old pickup muttering to himself, “This one could use some serious restoration.”

Can you picture these grown men, embracing each other? Today’s verse tells us that they wept openly, probably with regret for the years that had passed without making things right but filled with sheer delight over the sparkling new finish on their family relationship.

My favorite part of this story is what they did after their broken relationship had been restored. They talked. There was so much ground to cover, so much to say. They couldn’t wait to get re–acquainted. Conversation after restoration is sheer delight.

Which one of our relationships needs to be redone? Which one is covered with the rust of silence and bitterness? Picture what it might be like to confess your wrongdoing, forgive them for their part, then sit down over coffee in luxurious conversation.

Wouldn’t it be great if people would gaze at this healing, like I do when I see that turquoise pickup? “What a tremendous restoration,” they’d say. 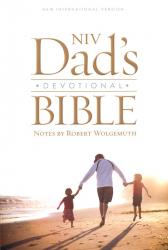 This Bible is filled with challenging and helpful information to help you to be a man who honors God, lives faithfully and loves his family—a man whose life will build a priceless legacy for generations to come. Features:
• 260 daily devotions—one for each day of the work week
• 100 “Questions Kids Ask” articles
• “Building Your Children” articles by Robert Wolgemuth
• Book introductions with a fatherly spin
Learn More