In the sixth month of Elizabeth’s pregnancy, God sent the angel Gabriel to Nazareth, a town in Galilee, to a virgin pledged to be married to a man named Joseph, a descendant of David. The virgin’s name was Mary. The angel went to her and said, “Greetings, you who are highly favored! The Lord is with you.” —Luke 1:26–28

Just When All Hope Is Gone, An Angel Appears
Does any human emotion run as deep as hope? Fairy tales, which are nearly universal, pass down from generation to generation an irrepressible sense that in the end the forces of evil will lose the struggle and the brave and good will somehow triumph.

For the people Luke introduces in this first chapter of his Gospel, all hope seemed like a fairy tale. As Middle Eastern empire rose and fell, the tiny nation of Israel could never truly break free from the domination of grater powers. No prophet had spoken to the people in four centuries. God had long threatened to hide his face, and indeed a dark shadow had fallen across the planet.

This is how one Jewish poet expressed the mood of the times:

We are given no signs from God;
No prophets are left,
And none of us knows how long this will be.
How long will the enemy mock you, God? (Ps. 74:9–10)

Rumors of Joy
For four centuries, the four hundred years of God’s silence, the Jews had waited and wondered. One flicker of hope remained, the ancient promise of a Messiah. On that promise the Jews staked everything. Then, suddenly, stories spread about the birth of a baby unlike any other.

Luke took care to relate these stories to the predictions of a Messiah given by the Old Testament prophets who originally stirred the hope. He portrays John the Baptist as an “Elijah” sent to prepare the way of the Lord.

A good historian looks for reliable sources, such as people who were personally involved in the events being described. Luke doesn’t claim to be an eyewitness himself, but he carefully interviewed many who did witness the events. Luke gives details about Jesus’ birth found in no other Gospel. Some scholars believe Luke must have interviewed Mary, the mother of Jesus, during his investigations into Jesus’ life. As a result, Christmas pageants rely heavily on the Gospel of Luke, making these words very familiar.

Excerpted from a “Guided Tour” article in the NIV Essentials Study Bible. 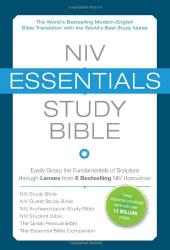 Quickly and easily understand, interpret, and apply God’s Word to your life. The variety of features in this Bible presents a multifaceted, exciting format for studying Scripture. This edition includes the entire NIV Bible text and the finest content, images, and study tools from six bestselling NIV Bibles. Learn More