Now the chief priests and all the council sought testimony against Jesus to put Him to death, but found none. For many bore false witness against Him, but their testimonies did not agree.

Then some rose up and bore false witness against Him, saying, “We heard Him say, ‘I will destroy this temple made with hands, and within three days I will build another made without hands.’” But not even then did their testimony agree.

And the high priest stood up in the midst and asked Jesus, saying, “Do You answer nothing? What is it these men testify against You?” But He kept silent and answered nothing.

Again the high priest asked Him, saying to Him, “Are You the Christ, the Son of the Blessed?”

Jesus said, “I am. And you will see the Son of Man sitting at the right hand of the Power, and coming with the clouds of heaven.”

Then the high priest tore his clothes and said, “What further need do we have of witnesses? You have heard the blasphemy! What do you think?”

Israel’s religious and political leaders wanted to rid themselves of Jesus, so they tried every means possible to convict Him of a crime. They paid an informant from among Jesus’ own followers, but he returned their money and declared the Lord innocent (Mark 14:43–46; Matthew 27:3–5). They orchestrated an armed mob to intimidate Jesus, but He kept His cool and restrained His followers (Matthew 26:51–54.). The leaders even presented witnesses to testify against Him, but the witnesses perjured themselves and contradicted each other (Mark 14:55, 56).

People tried to convict Jesus of a crime for which they lacked a shred of evidence. They failed because Jesus lived His life in plain sight. For every false accusation lodged against Him, there were countless examples of His love and moral perfection.

As others study our lives for evidence that we are followers of Christ, how many of these marks do they see?

Drawn from the Apply the Word Study Bible.

What challenges and successes have you encountered as you seek to pursue faith that is transformative and authentic?
Join the conversation below! 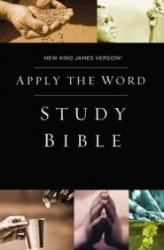 The Apply the Word Study Bible brings you to an intimate understanding of the Bible’s message, helps you think about it and apply it to your life. You’ll discover that the Bible is a very practical book, just what is needed to guide you through every day! Features include:

Hundreds of sidebar articles help you see the relevance of Scripture for everyday living
Insightful introductions to the books of the Bible
Study notes about people and places of Bible times
Charts, tables, maps, and concordance