“Don’t be alarmed,” [the angel] said. “You are looking for Jesus the Nazarene, who was crucified. He has risen! He is not here. See the place where they laid him.” —Mark 16:6

And in his empty tomb sat an angel telling the grieving women who came to minister to their fallen master’s body, “Don’t be alarmed.”

Of course, Jesus had told his followers what to expect. He would die…which he did. He would be buried…which he was. And in three days he would rise again. Now he wasn’t in the tomb. And there was an angel who understated the situation by saying, “Don’t be alarmed.” Of course they were alarmed, afraid and distressed: The soldiers had crucified Jesus; he had lain in the tomb three days; the huge stone they had worried about had been rolled away; there was an angel standing there…talking to them!

It’s easy to look at ancient Bible characters and second–guess their responses: “Why didn’t they get it?” We like to think we would have gotten it. We would have understood Jesus words’ about his death and resurrection. We’d have comprehended that he must first suffer as our Savior before he could return as King of kings. The knowledge that the sign of Jonah meant Jesus would lie three days in the tomb would have been a breeze for us to comprehend, or so we like to think.

But really, if we had been there, encountering an angel in a dark, empty tomb, we would have probably run away in terror or stood there quaking in our sandals. We might have been like the women who “said nothing to anyone, because they were afraid” (verse 8). What were they afraid of? Perhaps they were afraid of the Roman soldiers; they may have been afraid people would think they were crazy; they may have been afraid they wouldn’t relay the angel’s message correctly.

Reflection 1. Put yourself in the women’s shoes. What emotions other than fear might they have been feeling? 2. Are you afraid to tell others Jesus is risen? 3. Who needs to hear this Good News? Pray for the faith to overcome your fear.

From a devotion in the NIV Women’s Devotional Bible. 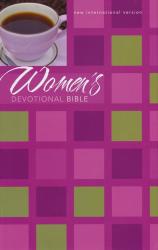 Apply God’s Word to your everyday life! This Bible includes a full year of devotions written by women of God offering inspiration, candid perspectives, and guidance—all within the complete text of the NIV Bible. Learn More

You cannot give what you yourself don’t have. As we begin to understand the unconditional love the Father has for us, that there is no limit to His love for us, no matter where we’re at or what we’ve done, then we can begin to love our neighbour as ourself.

Loving a neighbor is easy as long as they do not live next to you.

Love covers…we love because He first loved us. When we dare to open our hearts to the revelation and substance of the Father’s Love as revealed to us by His Son Jesus, we can come into full heart forgiveness towards those who have hurt us. I’d go so far as to say that you will hold the hand of your abuser in Love as you reveal the Gospel of salvation to them. You will weep at the lostness of your father who returned from war unable to process the horrors of it, ultimately taking it out on his wife and family. You will touch the heart of the wild young criminal who was beaten, drugged, and neglected by the very parents who should have protected and nurtured him. We get God’s eyes on these lost ones. When we ourselves receive the healing Love, we can in turn touch others with that supernatural stuff that His Love is.

Thank you for elucidating on this subject. Indeed, understanding that we can love ourselves despite our many faults, enables us to accept we can do the same for others. A veil has been removed. Thank you

How do I love myself? – the sin within allows that to happen quite naturally. To “love my neighbor as myself”, to transfer the love of self to the benefit of others is a high hurdle to clear – some might even say impossible but what’s impossible with man is possible with God. I’m a conduit of Gods love flowing through me and so I’m not loving my neighbors with my love. My love is self-centered, self-seeking, conditional and performance based. God’s love is others-centered, outward-seeking, unconditional and eternally unlimited. What are some areas in my life that might be preventing God’s love from flowing through me? Thanks so much for this thought provoking post!