“And when they were come to the place, which is called Calvary, there they crucified him, and the malefactors, one on the right hand, and the other on the left.”  —Luke 23:33 (KJV)

Calvary is derived from the Latin word for “skull.” In the account of Jesus’ crucifixion, Luke alone does not use the Aramaic word for skull, “Golgotha,” but only the Greek translation, kranion. The translators of the King James Version used the Latin term which was familiar to them. In any case, Calvary, or Golgotha as the New Testament more commonly has it, is the name of the execution site just outside the walls of Jerusalem (John 19:20; compare, Hebrews 13:12-13) yet in a location easily observable (Mark 15:40).

The naming of this site as the “Place of the Skull” can be explained several ways:
(1) Many skulls were found there.
(2) It was a place of execution.
(3) The site in some way resembled a skull.

Two sites are presently regarded as the possible original locations of Golgotha:
(1) a mound under the Church of the Holy Sepulcher and
(2) a site known as the Garden Tomb or Gordon’s Calvary.

Both sites were outside the first–century walls. The first has the support of church tradition from the fourth century on. The second resembles a skull. Although both lack conclusive confirmation, most scholars favor the former as the authentic location of Calvary.

Have you or anyone you know ever visited Calvary?

Drawn from an annotation in the King James Study Bible. 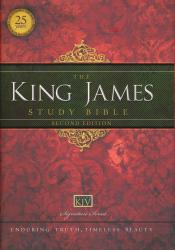 A trustworthy resource for a beloved translation! This impressive work includes over 20,000 study notes, book introductions and outlines of each book of the Bible, an enhanced concordance with Hebrew and Greek word studies, in–text maps, charts, diagrams, illustrations, and 16 pages of color maps. Learn More