My son, if you receive my words,
And treasure my commands within you,
So that you incline your ear to wisdom,
And apply your heart to understanding…
Then you will understand the fear of the Lord,
And find the knowledge of God.
For the Lord gives wisdom;
From His mouth come knowledge and understanding

The study of cultural backgrounds is important because grasping the original audiences perspective helps us understand the setting to which the inspired authors communicated their message. Information may show contrasts as well as similarities between our own culture and that of the ancient world. Therefore there are some principles to consider when comparing Biblical text with ancient contexts: 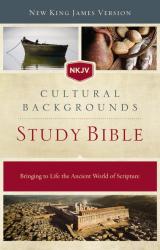 Packed with expert insight into the customs, culture, and literature of Bible times, the NKJV Cultural Backgrounds Study Bible brings difficult passages of Scripture into sharp focus. Discover new dimensions of insight to even the most familiar Bible passages as you take a behind-the-scenes tour into the ancient world.