“You will conceive and give birth to a son, and you are to call him Jesus. He will be great and will be called the Son of the Most High. The Lord God will give him the throne of his father David, and he will reign over Jacob’s descendants forever; his kingdom will never end.” Luke 1:31-33 NIV

When Gabriel announced to Mary that she would have a son, the angel invoked a promise that had echoed throughout the Old Testament. Her son would be called the Son of the Most High and would reign on the throne of his father, David. Those familiar with the Law and the Prophets, including Mary herself, would have quickly begun to connect the prophetic dots.

God had picked David, a young shepherd boy, from among an entire family of brothers and made him the ruler over Israel. God promised to make David’s name great. In addition, God promised that after David died, God would raise up one of his offspring to establish the throne of his kingdom forever (2Sa 7:8-16).

During his life, as David faced enemies and conspiracy, he sang of praise to God for protecting him as God’s anointed (Ps 2:1-12) and for establishing his line for as long as the heavens endure (Ps 89:19-29). David intoned a psalm of praise that contained a phrase that Jesus later quoted to confound his critics: “The LORD says to my lord…” (Ps 110:1, Mt 22:44). Another psalm affirmed that God, in his promise to David about the duration of his throne, had sworn an oath that could not be revoked (Ps 132:11-12).

The prophet Isaiah continued to prophesy the fulfillment of God’s promise to David. He wrote that to his people a child would be born, a son would be given and the government would be on his shoulders (Isa 9:6-7). Isaiah also affirmed that a shoot would come up from the stump of Jesse, David’s father, and from its root a Branch (referring to Jesus) would bear fruit (Isa 11:1-15).

In time, God’s plan became clear: he would fulfill this promise through his Son, Jesus. When the angel appeared to Mary, God provided the ultimate update on God’s plan to keep his promise. The baby in Mary’s womb, conceived by the Holy Spirit though Mary was a virgin, is God’s Son who would reign eternally (Lk 1:31-33). As a capstone to the astounding declaration, the angel reminded Mary that no word from God would ever fail (v. 37).

The intricate history of God’s initial promise realized so fully at Jesus’ first coming increases confidence that the rest of God’s promises will be fulfilled at Jesus’ second coming and after that, into eternity. 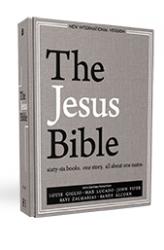 66 Books. One Story. All About One Name.
The Jesus Bible, NIV Edition, with study notes by a writing team from Passion plus special contributions from Louie Giglio, Max Lucado, John Piper, Ravi Zacharias, and Randy Alcorn help you meet Christ in the pages of the Scripture. Learn More