And I will pray the Father, and He will give you another Helper, that He may abide with you forever—the Spirit of truth, whom the world cannot receive, because it neither sees Him nor knows Him; but you know Him, for He dwells with you and will be in you.
—John 14:16-17 NKJV

The Feast of Weeks
The Feast of Weeks was the festival celebrated at the beginning of the grain harvest (Exodus 34:22). This was the feast at which the Hebrews offered their firstfruits of the harvest to the Lord at the tabernacle. It was one of the three major Jewish feasts, along with the Passover and the Feast of Tabernacles (see Exodus 23:14–17; 4:18–23; Deuteronomy 16:1–17).

According to Leviticus 23:15, 16, the Feast was celebrated for seven consecutive weeks beginning “the morning following the Sabbath day” of Passover. Thus comes its title, the “Feast of Weeks.” Later in the Old Testament this feast became known as “Pentecost” (“fiftieth”), since it was celebrated on the fiftieth day after Passover.

Pentecost
The Jewish Feast of Pentecost was fulfilled as described in Acts 2. On this Day of Pentecost came the outpouring of the Holy Spirit upon the disciples of Christ, as Christ Himself had promised (John 14:16, 17).

The Orthodox services for Pentecost place their emphasis on the descent of the Holy Spirit in all His fullness. His descent means that the Mosaic Law, given by the Lawgiver and honored on the Jewish feast day of Pentecost, is now transcended: “The All-Holy Spirit, who freely distributes gifts to all, has descended and come to earth; not as He formerly had in the Law’s dark shadow, shining in the Prophets, but now in very truth, He is bestowed in us through Christ” (Vespers, Thursday after Pentecost).

The worship services for Pentecost repeatedly emphasize how Old Testament prophecies of the Holy Spirit are fulfilled on this day. Two of the greatest of these prophecies are found in the Old Testament readings for this Feast—Ezekiel 36:24–28 and Joel 3:1–5. St. Peter directly quotes the passage from Joel in his exhortation to the Jews on the Day of Pentecost (Acts 2:16–21). A third reading—Numbers 11:16–17, 24–29—relates how the Lord commands Moses to select seventy of the elders of Israel, who, when the Spirit comes upon them, prophesy at the tabernacle. The comment of Moses regarding this event, “Would that all the Lord’s people might be prophets when the Lord would put His Spirit upon them” (Numbers 11:29), is prophetic of the Day of Pentecost.

Excerpted from a study article in the Orthodox Study Bible.

How have you felt the Holy Spirit working in you? Please share below! 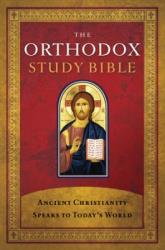 This unique Bible presents the treasures of the ancient Christian perspective and offers a deeper experience into the roots of our faith.
Old Testament newly translated from the Greek text of the Septuagint, including the Deuterocanon
New Testament from the NKJV
Commentary drawn from the early Church Christians
Lectionary and prayers
Book introductions, outlines, glossary, maps, and more
Learn More